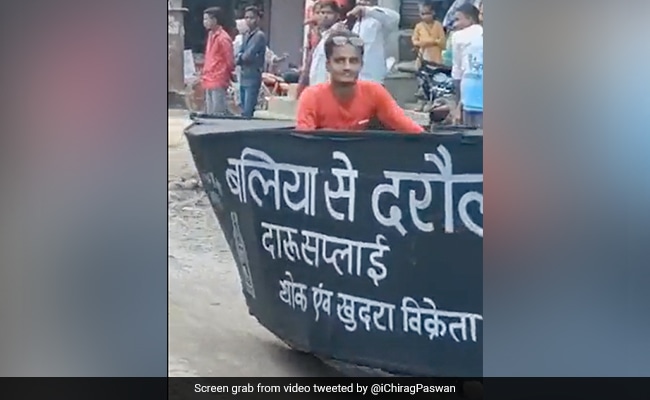 The video shows a person riding a bike that is openly supplying liquor.

After severing political ties with the Bharatiya Janata Party (BJP), Bihar chief minister Nitish Kumar appears to be under constant attack. Leaders like Chirag Paswan, Prashant Kishor, and RCP Singh do not back down from criticising the Nitish Kumar government.

Chirag Paswan, the president of the Lok Janshakti Party (Ram Vilas), has recently criticised the Nitish government for the rise in crime in Bihar. He has also criticised CM and the state police, calling them failures. He has been tweeting about a variety of problems. He questioned how Janata Raj could exist in a place where the police had failed.

In an attempt to refute Nitish Kumar’s government’s assertions that liquor is now banned in Bihar, he shared a video of a person riding a bike who claimed to openly supply liquor from Ballia to Darauli.

His tweet in Hindi, when translated to English, reads as “CM Nitish Kumar, it’s OK if your focus is more on the Prime Minister’s chair, but if you had paid a little attention here, then all this might not have been happening in Bihar. See how liquor is being supplied openly and your police are watching as mute spectators.”

In Bihar, liquor has been banned since April 2016 and is punishable by a 10-year prison sentence.

As a large number of offenders were first-timers who were lodged in jails, adding to the number of pending cases, which was more than three lakh, the Nitish Kumar government eventually amended the Liquor Prohibition Act under Article 37.

The first-time offenders were let go after paying a fine of between Rs 2,000 and 5,000 at the police station in the presence of the on-duty magistrate.

However, the CM, Nitish, has been under relentless attack from the BJP and other opposition parties since the Mahagathbandhan government took office in Bihar.

Additionally, Chief Minister Nitish Kumar convened a conference on law and order where he issued the cops numerous directives. He discussed beefing up the Bihar police force. Chirag Paswan, however, seizing the chance, has assailed the Nitish government.