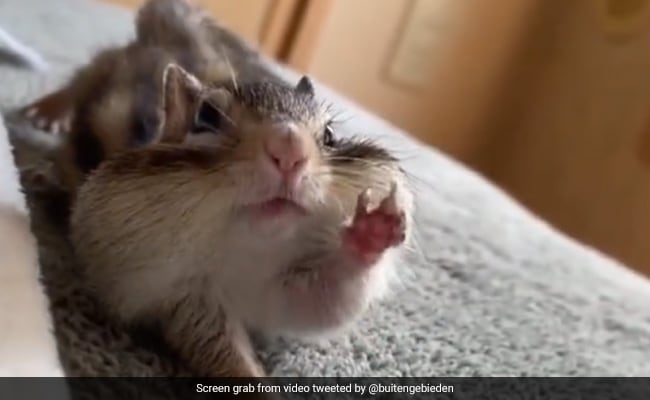 Picture shows the squirrel strugling to wake up.

It takes a little while to adjust to Monday after weekend offs. Since Monday is the beginning of the week, people have to prepare for scheduled things, such as work, school, and everything else. However, it takes people a while to adapt to it. One video gaining traction on social media shows a squirrel struggling to wake up from its bed, summing up how most of us feel just before beginning our work week.

Shared by a user named Buitengebieden on Twitter on Monday, the caption of the post reads, “Current mood.”

The viral clip shows a squirrel lying on bed stretching its whole body and yawning. It can be seen struggling to wake up in the morning.

Within just a few hours of getting shared, the post has amassed over 6.1 million likes and more than 1.5 lakhs likes. The post has also been shared for more than 23,000 times by the Twitter users. The users have swamped the post’s comment area.

One user wrote, “My ill-fated and short-lived attempt at core yoga.”

“Ohhh my. Someone is gonna take a lil nap,” commented a second user.

Squirrels are known to be one of the friendliest animals. People enjoy feeding them on the streets, and they enjoy interacting with humans too.

With the exception of the high arctic and the toughest deserts, they may be found in practically every environment, from tropical rainforest to semiarid desert. Although some of them also eat insects and small animals, they are predominantly herbivores that eat seeds and nuts.

Nirogi Haryana: 42,000 families to get free check-up in Panchkula