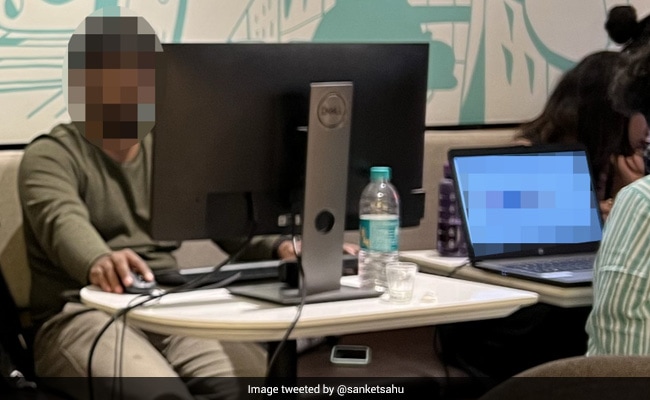 While it is not unusual to find people working on their laptops in coffee shops, the floods in Bengaluru recently forced a man to carry his desktop to a cafe.

Twitter user Sanket Sahu shared a photo of a man who was working from a coffee shop in Bengaluru, where he had set up his desktop on a table. In the caption, Mr Sahu claimed that a group was working from ‘Third Wave Coffee’ with a “full-fledged desktop setup” because their offices had been flooded.

“I just saw a group working from the Third Wave Coffee with “a full-fledged desktop setup” because their offices are flooded,” the Twitter user wrote while sharing the picture on September 7.

I just saw a group working from the Third Wave Coffee with “a full-fledged desktop setup” because their offices are flooded 🤯@peakbengalurupic.twitter.com/35ooB1TOqU

Since being shared, the image has sparked amusement on social media. “It would have been understandable if used monitor as an external screen along with laptop.. But man he got the entire CPU stuff along,” wrote one user. “legit ride or die situation,” said another.

Some internet users even pointed toward the deeper problem of toxic “hustle culture”. “This is really bad. Is Bangalore the latest city with toxic corporate culture?” a user said. “I don’t think we should be romanticising this. This is actually sad,” commented another.

Meanwhile, no one was spared by the Bengaluru floods last week, not the impoverished living in their huts nor the wealthy CEOs living in their opulent houses. Waterlogging led to traffic jams and disruptions in the lives of residents in several parts of the city. In many places, basements of shops and apartments also got flooded.

The Bengaluru civic body was blamed for not being prepared when heavy rain triggered floods in the IT city almost drowning flats and villas, some of which cost up to several crores apiece.