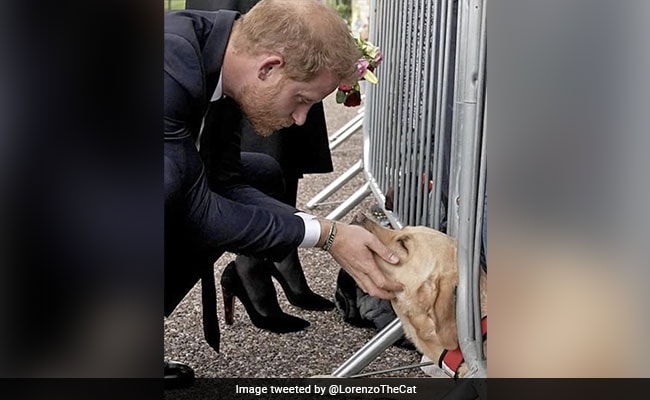 A heartwarming photo of Prince Harry sharing a moment of mourning with a loving dog during a walkabout in Windsor has gone viral on the internet.

On Saturday, the Duke and Duchess of Sussex joined the Prince and Princess of Wales as they went to the castle to look at floral tributes left for their late grandmother, the Queen. During the walkabout, the four were filmed greeting members of the public, who shared their condolences.

But Prince Harry seemed enthusiastic about meeting one attendee in particular – a golden labrador named Louis. The royal was pictured crouching down, giving the well-behaved pooch some ear scratches.

Louis belongs to Sarah Gracie, who also uploaded photographs of the prince and her pup on her Twitter account. While sharing the images, she wrote, “When our little pup Louis met Meghan and Harry as we paid our respects to The Queen.”

When our little pup Louis met Meghan and Harry as we paid our respects to The Queen #QueenElizabeth#HarryandMeghan#Windsorpic.twitter.com/OLkhW6gcaU

Reacting to the adorable pictures, internet users dropped love-filled comments to gush over Prince Harry. One user wrote, “What a cutie. Harry and dogs are such a great combo.” Another said, “Louis looks like he’s giving Harry some much-needed comfort.”

A third commented, “I have never seen a better picture of someone who needed a dog’s love.” A fourth simply wrote, “Photo of the decade.”

According to Daily Star, Prince Harry and his wife Meghan Markle are renowned dog lovers. Last month, the couple reportedly adopted a seven-year-old dog named Mamma Mia, who was one of the beagles that had been rescued from a research plant in the United States. The Duke and Duchess also have three other dogs – a beagle, a Labrador-German shepherd mix and a black Labrador.

Also Read | Ahead Of Queen’s Funeral, Flowers Sales Shoot Up: “Just To Say Thank You”

Meanwhile, BBC reported that it was Prince William who had extended the invitation to Prince Harry and Meghan to go on the walkabout where the four inspected the floral tributes laid outside the gates of the royal estate to honour Queen Elizabeth. Before the Queen’s death, the two had no intentions to meet, despite Prince Harry staying in Frogmore Cottage, a mere 640 meters from William and Kate’s Adelaide Cottage.

However, King Charles in a phone call had told Prince William, now Prince of Wales, to set aside their ongoing feud ahead of the Queen’s funeral.

Ranveer Singh In A Double Role Looks Wacky And Entertaining