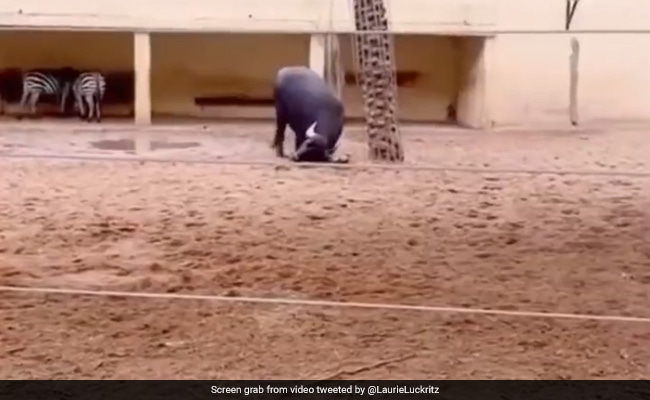 The buffalo standing nearby does his hardest to help the turtle by flipping it over.

It is not just humans who display emotions or care for others, animals too share a good bond with other animals, and care for them. It is said that helping hands can come from the most unexpected places.

One such video is taking the rounds on the internet, in which a turtle is seen flipped on its back on the ground, while a buffalo standing nearby does his hardest to help by flipping it over.

The video was shared by Dogs and Wild Animals on Instagram on June 21, but is going viral now.

Since being shared, the video received over 5.1 million views and around 19,000 likes. Users have flooded the comment section of the post with their heartfelt remarks.

“Buffalo’s eyes after he realized one eye looked to the left and the other to the right, its eyes almost fell out,” wrote a user.

Turtle videos are frequently shared on social media. They have an interesting way to amuse the world.

A video went viral last month shows group of turtles, which are trying to balance on an unstable log in a river. The 30-second clip starts with seven turtles on the log and concludes with only three. However, no winner could be declared because the video ended before that point.

The turtles are seen sliding off and falling into the water as the log rolls back and forth. The log moves as if it were specially designed for the game.

The video of their little game was shared by Buitengebieden on Twitter and amassed 5.4 million views.