India tour of West Indies: All-rounder Axar Patel topped a unique ODI list after hitting 5 sixes in his match-winning 64 in the 2nd ODI against the West Indies in Port of Spain on Sunday. 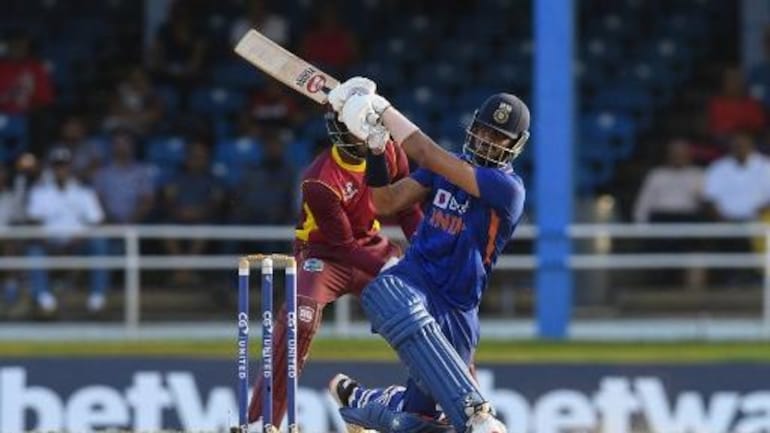 India all-rounder Axar Patel surpassed MS Dhoni in a rare ODI list after his match-winning knock of 64 in the 2nd ODI against the West Indies in Port of Spain, Trinidad on Sunday, July 24. Axar Patel hit his maiden ODI fifty, smashing 64 in just 35 deliveries as India successfully chased a steep target of 312.

Axar Patel, who walked in at No. 7, hit 3 boundaries and 5 sixes as he played a blinder when India needed 48 in the last 5 overs of the thrilling chase in Port of Spain.

By hitting 5 sixes, Axar Patel went past MS Dhoni and Yusuf Pathan on a rare list of Indian batters with more than 3 sixes in a successful run-chase in ODI cricket while batting at No. 7 or lower.

India were in a spot of bother when they lost well-set Deepak Hooda in the 45th over shortly after Sanju Samson and Shreyas Iyer fell right after getting to their fifties. However, Axar batted with the lower-order batters and successfully steered India past the finish line.

Axar said he wants to continue chipping in with match-winning contributions to the team, especially in ODI cricket. The Gujarat all-rounder got an opportunity to play ODIs for the first time since 2017 after he was picked for the West Indies series.

Axar had chipped in with a crucial run-a-ball 21 in the first ODI which India won by 3 runs.

“I think this is a special one. It came at a crucial time and also helped the team to win the series. We have done the same in the IPL. We just needed to remain calm and keep the intensity up. I was playing an ODI after close to 5 years. I would want to continue performing like this for my team,” Axar Patel said after India’s 2nd ODI win.